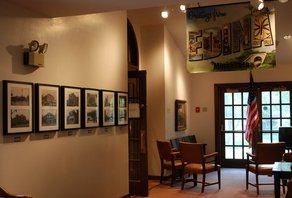 The Summer of 2013 has been a busy one for me, one that has involved a wide variety of commercial and personal photography projects.

A project I recently finished was for my hometown of Edina, Minnesota which is celebrating their 125th anniversary (also known as the “Quasquicentennial”). The Edina Historical Society asked for my help in creating an exhibition of “before and after” photographs of various landmarks around the city.

Although several structures remain standing in Edina from the 1880’s, for this project we decided to focus on landmarks that had an interesting “before” shot, or have received less attention than the other well-known landmarks around town.

The task I was assigned was to photograph the “after” shots after the “before” photographs were selected, make sense ? (yikes).

Most photographs were shot from roughly the same angle and distance as the original. I think we ended up with some fairly interesting photographs.

There was one specific landmark that I really hoped we could include. I really felt this was culturally significant to those who grew up in Edina in the late 1950’s to 1960’s.

That landmark is Southdale Shopping Mall – the world’s first fully enclosed shopping mall. No, this wasn’t your typical mall, it was THE mall that inspired the development of other enclosed shopping malls around the country. In fact, in 2012 Southdale was named one of the “Ten Buildings That Changed America” by a panel of architects and designers and was featured in a PBS special titled “Ten Buildings That Changed America“.

Built in 1956, Southdale was the first shopping mall where store fronts faced an enclosed interior rather than a parking lot or street. It was designed by Los Angeles based architect Victor Gruen, and commissioned by Minnesota’s own Dayton retailing family, the same family who would later create and build Target Stores into a discount retailing giant.

As mentioned, I grew up in Edina and my memories of Southdale go back to it’s earliest days. It played a role in my social and cultural development from toddler to teen years. Unfortunately, the original mall that I grew up with has undergone several remodels and additions, and as a result has lost most of it’s original charm and character.

Up until the 1970’s, the interior of Southdale was classic 1950’s Modern. It included some unique features including a 2 story bird cage, a large goldfish pond, floor to ceiling bronze tree sculptures and a huge wall clock that resembled the work of clock designer George Nelson.

Southdale also had an indoor sidewalk cafe with patio tables and chairs that made you feel like you were seated at a sidewalk cafe. It was a large interior space, at least at that time.

In the 1970’s this all started to change. The unique features like the birdcage, goldfish pond and terrace dining area were removed and provided more space for seating and kiosks.

In the 1990’s Southdale was facing stiff competition from the newly opened Mall of America in neighboring Bloomington. To remain competitive, Southdale underwent a large expansion which included more parking ramps so visitors wouldn’t need to walk as far from their cars. In fact it’s hard to see the original mall exterior because it’s now surrounded by parking ramps.

By the mid-1990’s, Southdale had taken on the appearance of any other shopping mall around the country, and much of it’s 1950 modern interior design features had been replaced by more modern day features and amenities in demand by consumers..

Overall, the “Before and After” exhibit was a great project because of all the memories I have of growing up in Edina. A big thanks goes out to Marci Matson (Executive Director at Edina Historical Society) for asking me to get involved in this project, She also helped get all of the historical images ready for the photo lab. A special thanks goes out to Bob Kojetin who lead the installation of the exhibit.

The final framed pieces are on display at the Edina Historical Society until Dec. 21st, 2013.

Photographs For Jason’s Deli in Edina