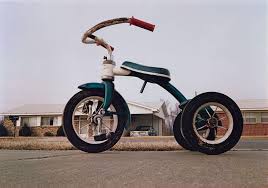 A while back I wrote an article titled “Fine Art Photography – Defined“. In that post I discussed fine art photography and how it differentiates itself from other types of photography. The thing I really love about the visual arts is the simple fact that there are no right or wrong rules… anything is artistically possible.

That said, I don’t necessarily love all types of art. For example I don’t have much interest in art that’s politically motivated or art where the artist becomes “the hero” or primary focus of the work. I like art that’s visually interesting, unique and challenging.

Artists always look at other artist’s work for inspiration. It’s part of their DNA. Often times you’ll find artists that copy a concept or idea from another and then incorporate that in their own work, sometimes without even realizing it. That’s a different story though.

One photograph that’s captured my attention over the past year or so is William Eggleston’s “Memphis”. It’s not so much the photograph or image that intrigues me, what really intrigues me is the publicity it has received.

In March 2012, this photographic print sold for a whopping $578,500. The buyer was the Minneapolis Art Institute.

I find it really amazing that such a mundane image could demand such a hefty price. I’m not here to diminish William Eggleston’s work, but rather to try to put some context around this image so that it makes more sense from a fine art perspective.

Art history tells us that Eggleston’s claim to fame is that he was the first photographer to have color photography accepted by the art community. At that time, fine art photographers were still working in black and white and so having color photography on exhibit within a highly regarded gallery setting (MOMA 1976) brought a great deal of attention and stature to Eggleston.

Without this type of context, by today’s standards this photograph could easily be passed over. Color photography has been widely accepted by the art world, and photographs like this just don’t capture our imagination as much… or do they? The 2012 price tag of $578,500 tells me that the feeling is that they do.

I’ve had the good fortune of hearing David Little,  the Curator of Photography and New Media at the Minneapolis Institute of Arts (and purchaser of this photograph) speak briefly about this photograph on a couple of occasions. Unfortunately, I have to admit that I’m still mystified by all of the attention this photograph receives.

In his talks, Little mentions the bright colors of the red handle with the bright blue seat (the photo above is duller in color than the original). I suppose that in 1976 these elements really stood out against the backdrop of back and white photography.

Little has also mentioned the angle from which this subject was shot. I think this is the more interesting aspect because the tricycle is photographed from a lower angle, much like how a child would see it. It also looks huge when compared to the house in the background.

Finally, he highlights the dominant red, white and blue color palette and the fact that the handlebars are rusting and the grass is dead in the background. Possibly a commentary on the American dream? Maybe, but hardly a groundbreaking concept, especially in 1970 after the country had already gone through a major social revolution in the late 1960’s.

Although color, scale and angle bring more importance to such a common subject, from an art perspective the fact that Eggleston was able to get this work exhibited in a nationally respected art gallery at that time is likely what brought him the most attention and acclaim in the art world.

Are these elements alone incentive enough to go out and plop down $578k to buy it? When combined with Eggleston’s stature at that time, the image takes on a higher level of importance. I think it’s safe to say that the interest and value of this photograph in the 2000’s is multiplied exponentially by it’s historical importance in the world of fine art photography, rather than by the work itself.

I’d love to hear what you think about this photograph. Do you think it’s a significant piece for other reasons? Do you like it? Do you have other thoughts about it in terms of it’s historical context and relationship to today’s world of fine art photography.

Photoshop for the Non-Enthusiast and Dubious