It’s always fun to see my photographs displayed on the world wide web web (when it’s approved). Today I was happy to see one of my photographs used on the new City of Edina, Minnesota web site. 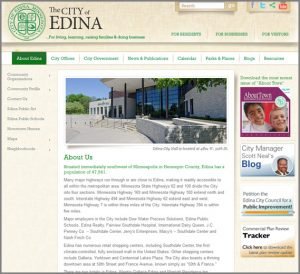 I have an agreement with the city where they can use certain photographs that I’ve provided without prior notice or credit. And although there’s no mention that I was the photographer, what I’d like to do here is take credit for it, and then go into a bit of detail about the shot itself.

This photograph was from 2011. On this specific day I was out doing some shots for the local 2012 Town Planner Calendar, for which I was the principal photographer. My goal was to capture a view of City Hall from a more unique angle than what I had seen from other photographers. It was beautiful day and what initially grabbed my attention were the contrasting colors (blue, green, black, tan) and the overall shapes created by the shadows and sunlight at that time of day.

A straight-on shot would have produced a rather flat and less interesting photograph. From a close-up, wide-angled perspective though, I found that I was able to capture more depth and detail which would result in a more interesting composition. Below is a screen shot of the City of Edina web site that included the final photograph I ended up with that day! View the original photograph.