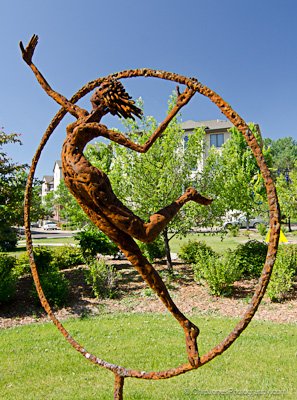 Sunniva - A Gift of the Sun by James Gabbert

A few more of my photographs were published this past month. Often times there’s no room for a photo credit or any type of story behind the photo, so I thought I’d highlight a few of these.

The photo to the left was published in the Winter 2012 edition of the “About Town” magazine, the official magazine for the City of Edina, Minnesota. It was taken at a “Meet and Greet the Artist” event on August 17, 2011 at Grandview Square.

The photo features two Edina residents, artist Jim Gabbert and Sondra Smalley. Jim is a wonderful figurative sculptor and his iron sculpture titled “Sunniva – A Gift of the Sun” won the 2011 People’s Choice Award in Edina. It’s currently on display at the Grandview Square park.

Gabbert and his family have a lengthy history in Edina. At one point Jim was CEO of Gabbert’s Furniture, a family owned business started by his father, Don. In 1958, his father Don moved the family retail store to Edina, and eventually purchased all the property surrounding his store. The Gabbert family later developed this property into the Galleria, a shopping mall now home to Crate and Barrel, Pottery Barn, Williams-Sonoma, and many other higher-end specialty retailers.

The Meet and Greet event provided an opportunity to mingle with three of the sculptors who have work on display at Grandview Square. The other two sculptors present were Perci Chester and Judd Nelson. This was basically a block party, complete with refreshments and live music, and was hosted by the Edina Art Center, the Square at Grandview Neighborhood Association, and the Edina Public Art Committee (EPAC), a committee.

If you get a chance, you should check out Grandview Square. It’s wonderful little area just west of Highway 100, just off Vernon Avenue.