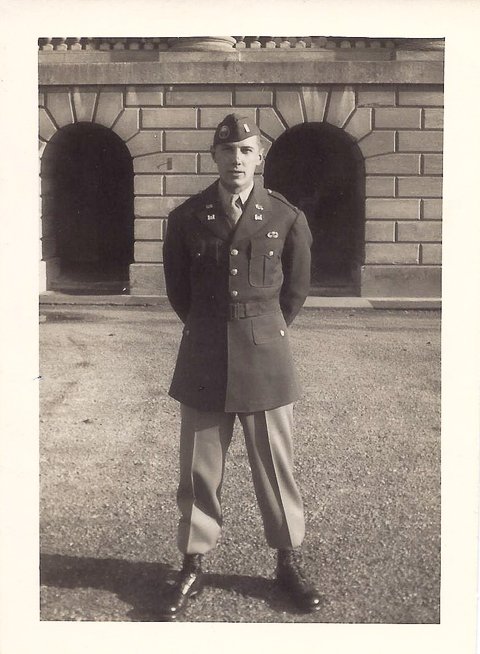 The 70th Anniversary of D-Day is here and I’d like to highlight one of my D-Day Heroes… my Uncle Ted.

Ted’s full name was Theodore Thomas Jones Jr. He was a paratrooper with the 101st Airborne and one of the first of the 13,100 who parachuted behind enemy lines in Normandy (France) on the morning of June 6th. His heroics are an ongoing reminder to me of how fortunate I am to be an American.

I never knew my Uncle Ted. He went missing in action on D-Day, June 6, 1944, but I have met several people who did know him, including his then fiancé, Marian Comb. Ironically, I met Marian for the first time only a few years ago. She was living in the same nursing home that my mother was. A small world indeed.

Marian married after WWII, but you could tell that she still had a great deal of affection for my Uncle Ted. She had a photograph of my Uncle Ted hanging in her room up to her passing.

In 1994, on the 50th Anniversary of D-Day, the St. Paul Pioneer Press ran a lengthy article about D-Day that highlighted my Uncle Ted’s experiences. It contained fond memories of Ted from friends and Marian.

Marian was quoted as saying “He was a fine fellow, intelligent, a lot of integrity, a great sense of humor.” She also said, “He was a special person. A gentleman.” They were engaged at the end of 1942, but delayed any wedding “simply because of the riskiness of the situation”. Sadly, Marian passed recently but I was fortunate enough to get to know her. I found her very engaging and wonderful.

I sense that Uncle Ted really enjoyed life and an occasional party or two. He graduated from the University of Minnesota in March 1941 and enlisted in the Army on September 23, 1941.

In a letter that my Uncle Ted sent prior to the war, he spoke of his involvement in a military exercise in Texas that was focused on the detonation of explosives at bridges. This was certainly an indication of what his mission would later be in the war.

By the time D-Day arrived, Ted was a 1st Lieutenant leading the 2nd Platoon of Company C, 326th Airborne Engineer Battalion (AEB), 101st Airborne Division. He had gone through extensive training and certification as a paratrooper and munitions engineer.

My Dad once told me that his brother’s platoon left London late on June 5th en route to France. I just can’t imagine what might have been going through the minds of those paratroopers as they flew over the English Channel en route to confront the enemy, the Germans.

I have heard recently of another D-Day paratrooper speak of what that experience was like. He said they really didn’t have time to be scared, they were more focused on their mission. He said that they were being fired upon when they flew over the coast of France and couldn’t wait to get out of the plane. He also stated that jumping out of the plane and slowly gliding down was something very special, but not frightening. I hope my uncle felt that way.

My Uncle Ted’s mission was to land behind enemy lines at Utah Beach, get to an already delivered ammunition truck and then take it to their destination in Carentan, France. These explosives would be used to destroy the bridge there and cut off the German supply routes to Utah beach. What happened en route – according to one of his platoon members – was that my Uncle Ted was in the ammunition truck when it was hit by German artillery. His remains were never found.

Based on reports I’ve read since, the 101st Airborne was still able to fend off the Germans and keep most away from Utah Beach. Within a day or two the Americans had control of the entire area and were on the move toward Germany.

Needless to say the entire family, including Ted’s fiancé were devastated. Marian Comb stated in the Pioneer Press article that “I’ll always remember what sadness this all has been, and realize what a fine life Ted would have had, could have had. But it was taken from him.” Ted was 25 years old at time of death.

The memorial for my Uncle Ted is located at the Normandy American Cemetery in Colleville-sur-Mer, France. His date of death is listed as June 6, 1944, but he remains very much alive in the hearts of many. He was truly an inspirational figure who displayed a great deal of courage on D-Day. God bless you Uncle Ted… and Thank You!